(A Tale of Two Mice)

The story of how gut microbes impact host weight began at Washington University in Jeffrey Gordon’s Lab. In 2005, PNAS* published Ruth Ley’s “Obesity alters gut microbial ecology.” Ley, a post-doc in Gordon’s Lab, noted that certain gut microbes produce a variety of enzymes that enable the human host to extract calories from polysaccharides (think starch-rich foods, like potatoes). Without these microbes, humans are not able to digest many complex starches. Ergo, people predisposed to obesity may have über calorie-extracting microbes! Ley and members of Gordon’s Lab analyzed more than 5,000 gut bacterial genome sequences from the intestines of genetically obese mice (ob/ob mice) and their lean, wild-type siblings. The ob/ob mice eat excessively and develop obesity, high blood pressure, and increased insulin. Compared with their lean counterparts, ob/ob mice had a distinct microbiota, exhibiting a 50% decrease in Bacteroidetes abundance and a comparative increase in Firmicutes abundance.

(An ob/ob mouse and wild-type mouse)

Bacteria belonging to the Firmicutes or Bacteroidetes phylum* dominate both the mouse and human gut microbiota. Did the Firmicutes contribute to the ob/ob mouse’s efficient caloric/energy harvest and increased adiposity? Another post-doc, Peter J. Turnbaugh, further examined the ob/ob microbiome in a 2006 Nature paper entitled “An obesity-associated gut microbiome with increased capacity for energy harvest.” Using sequencing and comparative metagenomics, Turnbaugh found that the ob/ob microbiota contained higher levels of methanogenic microbes*** that increase bacterial fermentation efficiency, contributing to mouse adiposity. In addition, the ob/ob microbiome contained enriched DNA sequences of enzymes and proteins involved in microbial starch digestion. Next, the team transplanted either a wildtype or ob/ob microbiome in germ-free mice. Both groups of mice were maintained on the same diet. Two weeks after transplant, the mice that received the ob/ob microbiome had a higher abundance of Firmicutes and a greater increase of body fat percentage, compared with the mice that received the “normal” microbiome. Very cool. Perhaps future diets will include a serving of lean microbiome!

In 2013, I spent a summer interning at Turnbaugh’s Lab examining the role of antibiotics and diet on the gut microbiota. It was a wonderful experience that solidified my interest in pursuing microbiology for grad school. For more information, check out some of the amazing research at Jeff Gordon’s lab (WU), Ruth Ley’s Lab (Cornell), and Peter Turnbaugh’s lab (UCSF).

For a similarly awesome Microbiota and Obesity story: check out this image and the last link below 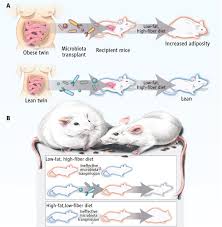 *Proceedings of the National Academy of Sciences of the United States of America. Established in 2007, PNAS Online publishes all PNAS articles from 1915 to the present. This is a great source for free, peer-reviewed articles.

Hello! My name is KCBauer and I am a PhD candidate at the University of British Columbia. I am a researcher, writer, musician, and explorer. Originally from Washington DC, I graduated with a BA in Music and BS in Biology in 2014. This blog focuses on the gut microbiota, the trillions of microorganisms that reside along the digestive tract. My grad research at UBC examines the role of the gut microbiota on human health, brain development, and anthropology. When I am not in the lab, I enjoy ambling through Vancity, listening to music, reading science journals, and hiking. If you have questions, ideas for blog topics, suggestions for place to visit in BC, or corrections send me an email at KCBauer@msl.ubc.ca.

2 replies on “PASS THE MICROBIOME PLEASE: The Gut Microbiome and Energy Harvest”

Very interesting, Kyly. I can see how you developed an interest in this area. Now if you can just develop a way to lose weight on this info, . . . !

There is a lot of interest in this area! Glad you enjoyed reading the article 🙂